Security researchers performed penetration testing on the networks of 45 various mid-sized companies and found that in real life scenarios 93% of those networks were able to be compromised to the point of business disruption. Here are the details:

The 45 companies were polled to determine what would be an unacceptable business interruption. They decided that the following met that criteria:

These became the target for the penetration testers.

In order for the penetration tester to achieve their target, they followed the following process:

There are a couple main ways to defend against these kinds of attacks:

Your company is not as safe as you think, so contact us for free initial cybersecurity evaluation and risk report.  .

Got a email from one of our co-managed IT / Tier3 / managed RMM clients that was having issues with DNS resolution. The network consists of a Synology NAS acting as Domain Controller / DNS Server and a VM on the Synology that runs the clients main application. Several of the workstations were having an issue where they could not browse to the IP address (\\192.168.0.11\sharename)of the application server at one time and could not browse to the UNC path (\\servername\sharename) of the same server on another day. First tried setting the external forwarders to Google DNS and the Forward Policy to Forward First, but the problem resurfaced. So we dug deeper into the DNS settings and found the following:

If you look closely the IP address of the server is 192.168.0.11 and the records for DNS servers associated with the domain above and below it point to servers outside the subnet of the application server (10.0.0.2). Upon further investigation this DNS server address was blocked by the firewall because it was an old IP address scheme that was no longer in use. The current good DNS server IP addresses are 192.168.40.10 and 192.168.0.10.

Turns out the stale DNS records were the problem. Made the needed changes to the DNS records and things are working great.

If your company needs a little extra help running the IT department, then contact us to setup a co-managed IT evaluation.

Your roaming profile was not completely synchronized error on Windows 10

Had a client receive the message “There was a problem with your roaming profile…” after logging into another computer on the domain. Research and found that a simple registry fix was available, but most fixes wanted admins to export a key from another working profile then import it into the broken one. Here is the actual registry key that was used to fix the profile:

Registry Fix for roaming profile was not completely synchronized 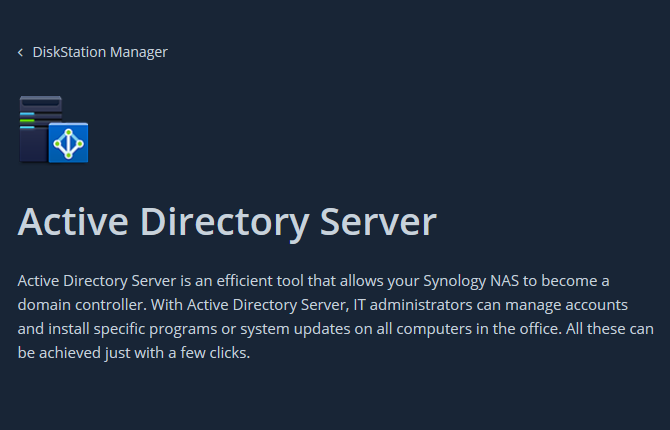 Recently provided some assistance to a local IT company that exclusively uses Synology devices instead of servers for their clients. They approached us to create Group Policy objects based on this new feature of the Synology. The Synology Active Directory Server app is based on the Samba 4 Protocol, here are some details of available features:

Here are some basic take-aways from our experience creating these Group Policy Objects (GPO) on the Synology Active Directory Server.

If your company is utilizing a Synology Network Attached Storage device and would like the functionality of an Active Directory domain, then contact us for assistance.

After finishing the migration of a client to their new cloud-based Line of Business SaaS application, it was time to finally get rid of the last Windows 2003 Small Business Server that we manage. The client had a Windows Server 2008 R2 Standard server that used to be the database server for the on-premise application which was being re-purposed as the new Primary Domain Controller (PDC) for the domain. After installing the Active Directory Domain Services (ADDS) role on the new server, I went to run DCPROMO on the new server and found that it asked me to run ADPREP /FORESTPREP on the domain. Took me a little bit of searching to find the Windows 2003 Server media and ran the command successfully, but this did not do the trick – turns out I needed the Windows 2008 R2 Server media and run the ADPREP32 command several times to complete the domain preparation for the new server to be DCPROMO successfully. Extracted the support directory from the media ISO to a folder on the root of the old Windows 2003 Small Business Server and then ran the following commands in order:

This one took a long time as the server was going from Schema 31 to Schema 47.

This one stated that I needed to run the next command, so I did.

The command actually stated that the update was already applied. So went back to the Windows 2008 R2 Standard server and ran DCPROMO again which told me that I needed to run one more command.

Ran this one even though I had no plans of having a Read-Only Domain Controller (RODC) in the domain. After all these commands the new server was able to be DCPROMO into the domain controller role. Now all that is left is FSMO roles, DNS, DHCP, printers and file shares.

If your company is going to use full disk encryption or has compliance requirements that you need consulting for, then contact us for assistance.