This is the eighth in a series about the concept of Zero Trust, which means in the IT sense that you trust nothing and always verify everything surrounding and connected to your network. Today’s discussion will be on Application Whitelisting.

Application Whitelisting is a process of determining which software programs the company absolutely needs to do business, marking them as safe, and blocking any other program that tries to run on company computers. This methodology has the distinct advantage of blocking almost all forms of malware on computers. Pairing this with a good next-gen antivirus creates an impenetrable wall against malware threats. It also prevents users from accidentally or intentionally running something that should not be on company computers. Here are some questions to ask:

If your company is wanting to lock down what is running on company computers, then contact us for assistance.

Security researchers performed penetration testing on the networks of 45 various mid-sized companies and found that in real life scenarios 93% of those networks were able to be compromised to the point of business disruption. Here are the details:

The 45 companies were polled to determine what would be an unacceptable business interruption. They decided that the following met that criteria:

These became the target for the penetration testers.

In order for the penetration tester to achieve their target, they followed the following process:

There are a couple main ways to defend against these kinds of attacks:

Your company is not as safe as you think, so contact us for free initial cybersecurity evaluation and risk report.  .

There has been a recent trend for companies to “negotiate” with the criminal terrorists behind wave of ransomware attacks across the world by paying the ransom. In a recent study some alarming statistics have been released:

If Ransom is Paid: The global findings also show that only 8% of organizations manage to get back all of their data after paying a ransom, with 29% getting back no more than half of their data.

Cost of Ransom: The average ransom paid was $170,404. While $3.2 million was the highest payment out of those surveyed, the most common payment was $10,000. Ten organizations paid ransoms of $1 million or more.

The Brighter Side: While the number of organizations that experienced a ransomware attack fell from 51% of respondents surveyed in 2020 to 37% in 2021, and fewer organizations suffered data encryption as the result of a significant attack (54% in 2021 compared to 73% in 2020).

What is Being Done

There are now organizations trying to create a common framework to address this threat. The Institute for Security and Technology has created a Ransomware Task Force. This task force has been working to develop this framework and has published some guidance. Even though this is just the foundation work, it is good to see that efforts are being made.

If your company is worried about the threat of ransomware, then contact us for assistance setting up a multiple layer approach to security.

How is Malware Delivered?

Read a recent study on the origins of malicious software aka malware. Here are the highlights:

29% – Malware is previously unknown to security vendors due to the continued efforts of malware creators to hide the software or make it undetectable.

88% – Malware is delivered to people’s inboxes and some of it bypassing normal SPAM filters.

8.8 Days – Time before regular antivirus vendors have discovered the malware and added it to their lists for detection.

$50 – The cost of a pre-fabricated malware kit that can be bought currently on the dark web.

What can be done?

A multi-tiered approach to security remains the best solution:

If your company is looking to enhance your network security posture, then contact us for assistance.

Number of Credentials Exposed Increased by 429%

A company named Arctic Wolf, a leader in enterprise security operation centers, published a report that states that the number of corporate credentials with plaintext passwords on the dark web has increased by 429% since March.

There are also startling statistics on the increase in email phishing attempts and the use of unsecure public wireless connections. These numbers are like due to the Work From Home employees using their own insecure computers and cyber criminals trying to take advantage of the trend. It appears that security measures that are used in the office need to be extended to the Work From Home network as well.

If your company is currently or is going to have Work From Home users, then contact us for assistance.

There has been information released by a security research firm called Eclypsium that there is a vulnerability dubbed Boothole in Unified Extensible Firmware Interface (UEFI) Secure Boot that would allow an attacker to completely take over a workstation, laptop, or server and be nearly undetectable. All hardware vendors will have to send out updates in the near future to patch the UEFI code to secure it against this “BootHole” vulnerability. Due to the difficulty in designing and testing these types of updates it will be some time before they are released. We will keep you posted as to the release of these updates as they become available.

If your company is concerned about security, then contact us for assistance.

“Office workers across the UK are wasting 14 days per person each year — or 1.8 billion hours a year in total — because the technology they’re given isn’t good enough.” – BetaNews

Slowness: When a computer is slow, so is the worker operating it. As a computer ages, like anything else, the parts inside wear down. Regular maintenance and replacement are the solution to increasing employee productivity.

Crashing: As computer crashes happen data is damaged or lost. This means work has to be re-done. Crashing can be a sign of software issues or hardware issues that require proper diagnosis. Once fixed employees can get back to business without interruptions.

Incompatibility: Out-dated software or hardware can cause what used to work perfectly to stop all together. Regular updates of all software and replacement of aging hardware is always the best policy. Helping employees stay on track with standard operating procedures makes work flow possible.

Security: Hackers are constantly working to find new ways of breaching security measures. Without current security solutions (firewall / DNS filtering / antivirus / SPAM filtering / password management ) and up-to-date systems, your network is a sitting duck. Network downtime due to a breach can be a business killer.

If your company is using out-of-date technology, then contact us for assistance.

“In a new stunning example of the scale and sophistication of online cybercrime, just before the holidays, DOJ charged two hackers with stealing hundreds of gigabytes of data—including sensitive intellectual property, confidential business data, and personal information from companies and government agencies around the world—as part of a multi-year cyber-espionage campaign that targeted managed service providers (MSPs) directly, bypassing the protections of client systems. This indictment is the latest example of the U.S. government’s use of the criminal justice system to crack down on state-sponsored economic espionage.

As alleged in the indictment, the hackers belong to what is believed to be an elite, Chinese government-sponsored group known within the cyber-security community as Advanced Persistent Threat 10 (APT10). The targets of the hacking campaign included companies in the aerospace, health care, biotechnology, finance, manufacturing, and oil and gas industries, as well as U.S. government agencies, such as NASA and the U.S. Department of Energy.”

Anatomy of the Breach

This sort of breach calls into question the operating procedures of MSPs everywhere, their security practices, and moral compass. If IT support staff are not trained in best practice and cannot keep from being infected via websites or emails, then what business do they have managing larger network systems with sensitive data.

If you are unsure of your MSPs practices and would prefer a company with transparency, then contact us for assistance. 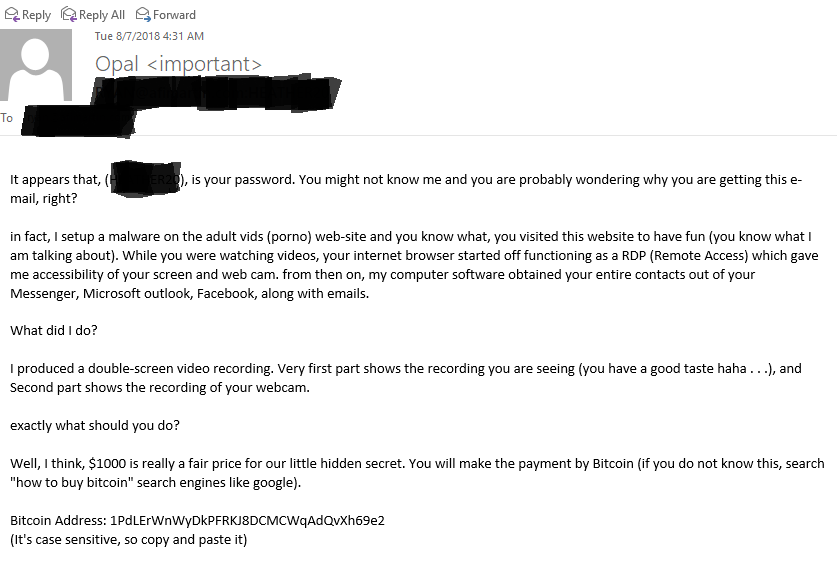 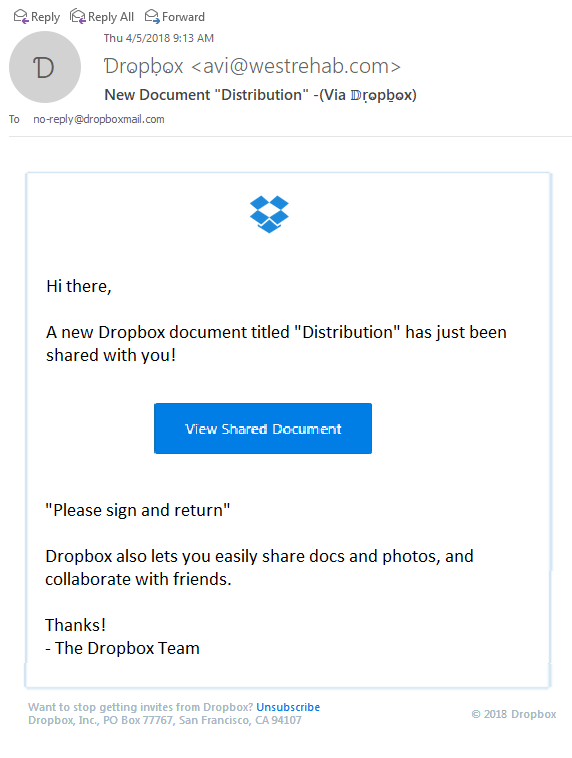 Thought that I would share a recently received new phishing email variant that could easily be overlooked and possibly cause damage to your network. The email appears to have come from Dropbox as a user sharing a folder with me, but a closer look shows many obvious signs that the email is a fake.

Starting from the Top

Look closely at the From portion of the email:

The lettering is actually another language where the font makes it look like English lettering. There is also the fact that the email is form someone that I don’t do business with. Always fight the urge to look at things that are not yours.

Stick to the Subject

Now to take a look at the Subject line of the email:

This has different lettering but it is again a different language used to look like English lettering.

And now the rest…

The final thing that caught my eye was the “button” in the middle of the email:

It actually looked fuzzy. It turns out the entire body of the email is a single image that is a link to their malicious site. Clicking anywhere in the body of the email would send you on your way to infection or account compromise. Hope this little tutorial helps you detect other phishing attempts in the future.

If your company is having trouble with SPAM or phishing, then contact us for assistance.